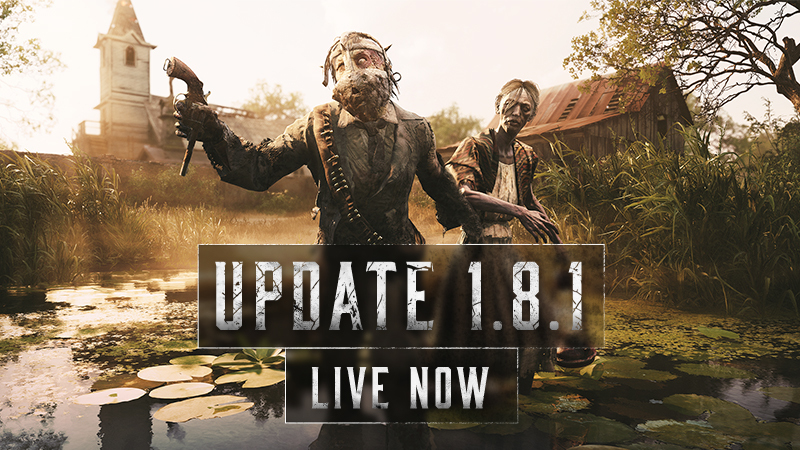 Update 1.8.1 is now live and with it comes to our new Quest system – “Summons” as well as two new grunt AI variants. Full details can be found below.

This update brings a new Quest system to the Bayou! This feature will replace the Daily and Weekly Challenges and can be found in the progress section under the “Summons” tab. Players will have to complete quests to collect a new reward called “stars” – this is separate from the Trials stars and will have a different symbol. These quests will reset every Monday.

Each Quest will reward a number of stars (ranging from 1 to 6) as well as in-game reward (Hunt Dollars/Consumables/Tools/Weapons/etc). Players can progress simultaneously with 2 Quests and can unlocked a 3rd Quest slot with Blood Bonds. Additionally, Hunters can complete each Quest multiple times to collect the stars, but the in-game items will only be unlocked through the first completion. Once you have collected 30 stars, you will earn 25 Bloodbonds. This reward can be claimed once per week.

There are currently 5 categories of Quests, which will target different goals/playstyles.

This new Quest system is designed to be more fun and engaging than the old challenge system. This is not a fully complete feature, meaning we will continue to add more quests, tweak rewards, and otherwise make adjustments where needed. We’re looking forward to your feedback and to see the crazy ways Hunters complete some Quests.

Both variations have been added to the default spawn pools for all three maps.

The Caldwell New Army is a new, small slot, compact ammo double action revolver that comes with a 6-round capacity. Overall, this weapon is best compared with the Nagant M1895 Officer, but it also shares some similarities with the Scottfield Model 3.

Like the Scottfield, it features a cylinder where all chambers can be accessed without the use of a loading gate, as well as an ejector to get used rounds out quicker. The main difference being that instead of breaking open from the top, the cylinder swings out to the left side of the weapon. This will allow for faster reload times in comparison to other compact revolvers in the arsenal.

In gunplay terms, the New Army is best compared with the Nagant officer as both are double action compact ammo pistols. The actual projectile is slightly larger which means its stopping power and range are increased.

However, the muzzle velocity of the Nagant office is slightly faster due to it having a tighter seal between the chamber and the barrel. They both have a similar rate of fire, with the New Army being a fraction slower, however in practice, this will be quite negligible, especially when reacquiring your target. This weapon can be dual wielded and benefits from the Ambidextrous trait.

Introducing the new, large slot, 6-round capacity, pump action shotgun – The Winfield 1893 Slate.
The Slate is an improvement on the earlier pump action Spectre 1882 in many ways: the mechanism is simpler meaning it is much smoother in terms of handling. It has an increased rate of fire and a faster reload when compared to the Spectre. The improved mechanism means there is no need for Bulletgruber with this shotgun as it can be topped up without needing to open the slide.

The barrel is shorter than the Spectre which means it has an increased spread and recoil, like other shotguns in the arsenal. This increase in spread means it will have lower average damage and a shorter One Hit kill range. Like the Spectre, the Slate can benefit from the Iron Devastator trait allowing you to stay in iron sights during the weapon charge.

The addition of the second pump-action shotgun to the arsenal means that we now have an alternative to the Spectre. The main drawback we want to highlight with the Spectre is the “clunkiness” that comes with the early implementation of the pump-action mechanism during this time period. The Slate uses a much more modern mechanism which was something we wanted to showcase in the game and use this to determine exactly how the weapon should feel when being used. A good example is the ability to top load the first round directly into the chamber when empty, which allows for quick tactical reloads when in a tight spot.

The Dum Dum ammo on the Nitro differs from other weapons because it is able to penetrate at least once. We felt it important to better differentiate the two ammo types by adjusting the name. It’s important to mention this does not change the gameplay in any way.

We know that many of you have expressed concerns regarding some of the changes around how Bloodbonds are earned in-game and we have been taking this feedback on board. We will have a much more detailed blog and video coming up in the next 2 weeks that will focus on discussing the topic of monetization, where we will try to address the concerns that have been brought up. Please keep an eye on our social channels for updates.

This issue was a high priority to us, and we are excited that we were able to fix this for 1.8.1. Thank you for reporting players that were abusing this exploit and for helping us fix this on Test Server!

We understand this list is long and can be quite daunting. We want to increase our transparency with the Community and publishing our Known Issues list is part of that. We want to assure you that we are working on these issues and will continue to do so.