A new update has been released for Mobile Suit Gundam Battle Operation 2 Update 1.60. You can find all the Game Update details, Bug Fixes, improvements, and Patch Notes below. Mobile Suit Gundam Battle Operation 2 Update 1.60 is now available for all platforms, including PS4, PS5, Xbox One, Xbox Series S/X, and PC. The file size may vary depending on the platform.

■HAPPY HALLOWEEN 2022!!
Well, Halloween Season has come again this year!
Base Camp will be transformed into the Halloween Colors for everyone.

Also, its here this year too! Halloween Campaign! 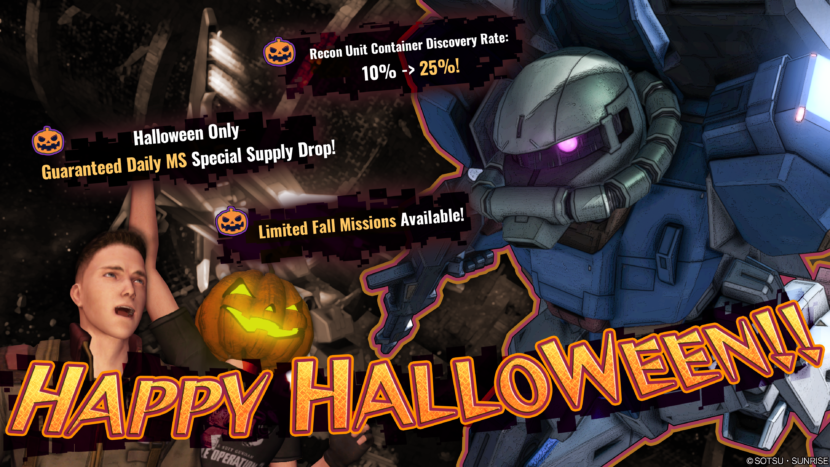 As a reward for the yearly Autumn Limited Missions, will be as following! 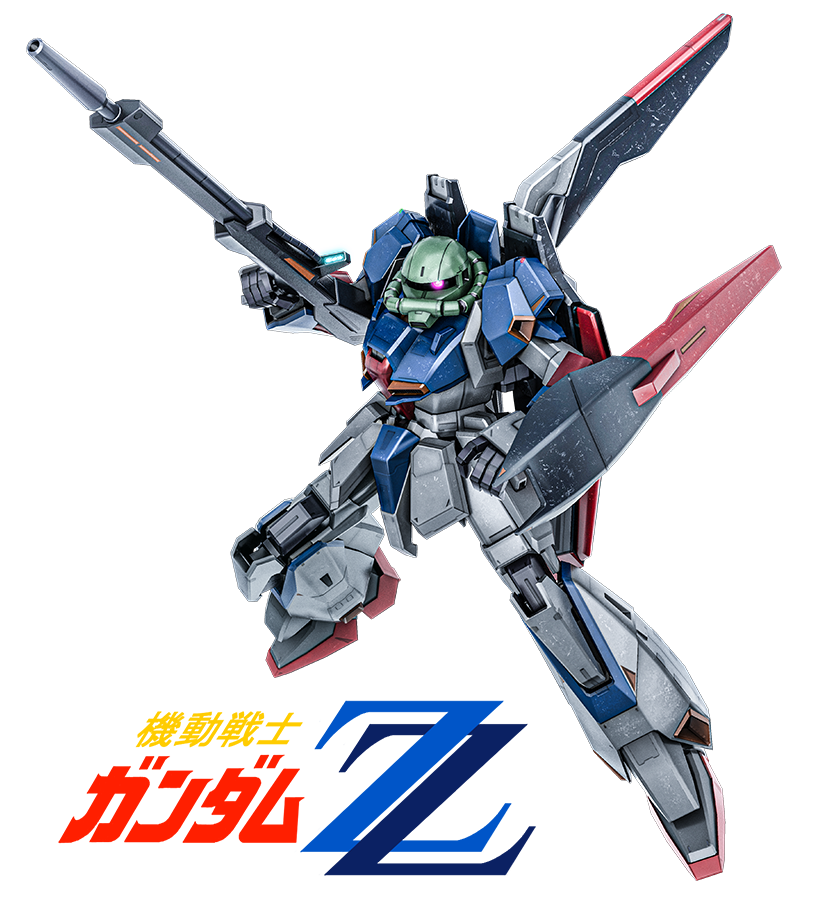 “A Zaku of Zeon?” “No, thats a Gundam!”
“Mobile Suit Gundam ZZ”s A.E.U.G.’s MS “Z Gundam [Zaku Head]” will appear in GBO2!
In the original, the head of Zeta Gundam was destroyed by “Hamma-Hamma”, then Eno used a Zaku’s head as a temporary measure.
Shangri-La soul is awesome right?
＜Unit Description＞
・Source “Mobile Suit Gundam ZZ” Sortie Limit “Ground/Space” General Unit with a cost of 550.
・In order to return the Z Gundam thats head part was damaged in battle, he used the know-how of a junk shop and forcibly connected the head of a adrift Zaku, so that it can be brought back to the frontline as soon as possible.
・Although it has lost its greatest advantage as a TMS, and its Tactical Range has been narrowed, its combat capability is adequate thanks to the performance of the base machine.
・Can be deployed both on the Ground and in Space.
Anyone can get it by clearing the limited missions during the Halloween period, so be sure to try it!
Moreover! Zaku Head is also available as a costume item for base camp to match the MS. 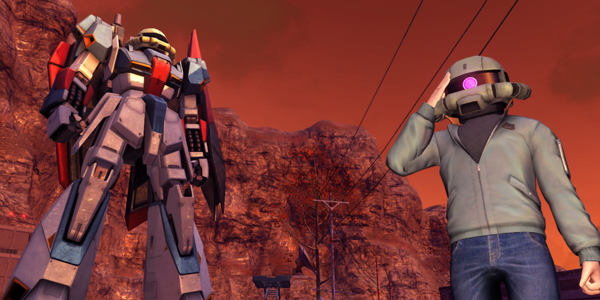 Head of the original Zeta Gundam is also available!
I would be happy if you could change it and have fun at the base camp.
Both look awesome and surreal side-by-side! 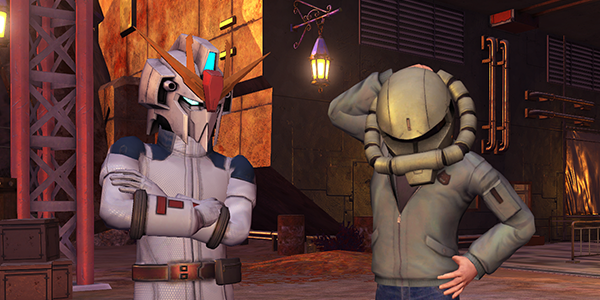 In addition, the limited items “Arm-Hugging Gogg” and the “Mask: Dullahan” that have been popular in the past Halloween Campaign will also be available again. Pilots who have not yet acquired them should take advantage of this opportunity to get them!
■Regarding the Modification of Existing Elements
By GBO2, not only new elements are implemented and events take place, long time existing elements are improved and adjusted in order to make them easier to play than ever before.
We will introduce some of the improvements that will be made in this update!
●Modification of Display Settings and switching of “Ally Info”

In the current battle screen, “Ally Info” is displayed in the upper left of the screen, and the display can be turned ON/OFF by pressing and holding the L3 button, but “Always Show” or “Holding the Button” or “Pressing the button once” option features are added. 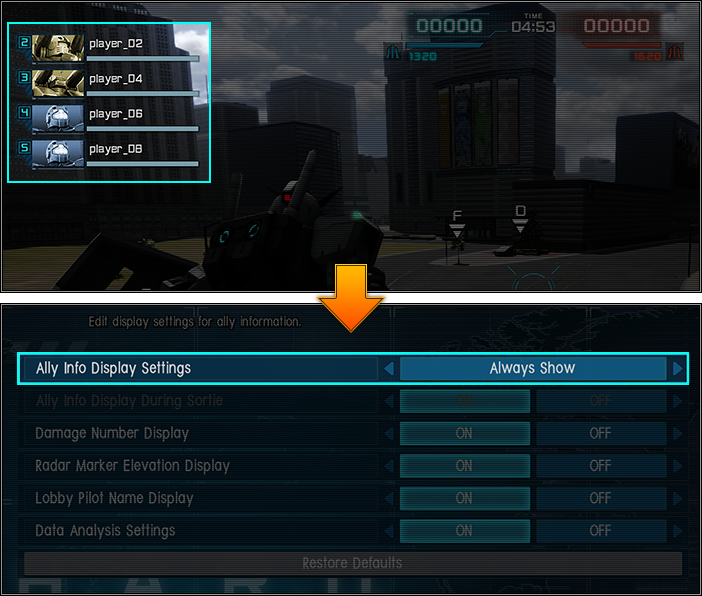 In the past, there was a case in which the display was turned ON/OFF by mistake. Setting method is changed to “Long Pressing the L3 button”, in order to prevent the occurrence of the mistake, but it couldn’t prevent it fully enough.
Since different people have different playing styles, “It would be more problematic if it could be no longer switched instantly”
Therefore, a modification is made to expand the options, Ally Info can be selected as “Always Show” or “Holding the Button” or “Pressing the button once”.
●Modification of existing MS
We will explain the overall adjustments by the information to be released at a later date, but here are the details of the two MSs that have undergone relatively large scale adjustments!

Sub-Weapon “Beam Cannon” requires Focusing, has high power, excellent range, and penetrating performance, but it was a little lacking in the number of steps to support its allies.
By the next update, it will be changed from “Requires Focusing” to “Normal Shooting Available Focus Weapon”.
Depending on the situation, you’ll be able to use both normal and focused fire in combat!
・Gyan: Skill “L-Arm Equipment Buffer” is added. 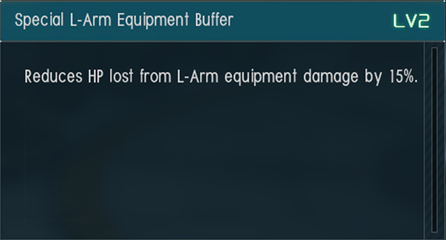 The Missile Shield that Gyan has on his left arm does not function as a “Shield” in GBO2, but is implemented in the form of equipment for using weapons such as “Needle Missile” and “Hide Bomb”. We have added a skill that reduces the damage received, and have refurbished it as equipment that also has a defensive function.
You can expect to reduce the damage taken when you keep the enemy in check while shooting “Needle Missile”.
●Added and adjusted the top LV of custom parts!
①Unlock of upper LV of existing custom parts
Higher LVs of existing custom parts will be unlocked on the day of the update!
・Auxiliary Generator LV5 [NEW]
By equipping high-cost MS with Beam-based equipment and a large number of slots, you can expect to improve weapon handling.

・Spaced Frame LV3 [NEW]
A high-level LV of the “Spaced Frame” that will fill the empty slots.
By all means, it is an option when short-range slots are a little too much.

Greatly reduces recovery time from status ailments such as Incendiary Damage, Radar Obstruction, and Psycommu jack.
※Effects of “AD-DCS LV1” and similar equipments are not stacked, so keep in mind!

②Adjustment of Existing Custom Parts
Among the existing custom parts, we will focus on those that have a low usage rate in battle, giving additional effects and adjusting consumption slots!
We hope with this update, it will expand the range of options for custom parts to equip.
■Last but not least
we would like to introduce the new MS that will be added to the lottery distribution right after the update!
Units weapons, skills and features will be introduced with a Special Video!